This was posted on my blog www.thelongbrownpath.com

Two small successes: a decent performance on my part, and seeing family members running too. Successes so small as to be practically meaningless. Each of our runs accounting for little more than 30 minutes of effort. Yet it occurs to me if a person could achieve small successes on a regular basis — a successful race, or contributing something small to a big project at work, or making some little observation that helped a friend or family member, or spending time on a community project — such tiny little successes could add up over time to a productive life and a permanent positive impact on the world. . . .

I ran this race last in 2015, showing up with a chest cold and unsure of what I could do, as my training schedule that fall had been disrupted by injuries. Nonetheless, I was determined to race hard and if possible set a new personal record (having set record after record over the previous year). But a few steps out of the start it was clear that target pace could not be sustained, and by the time I came spluttering to a stop at the finish, I was psychologically defeated: a finishing time that was almost two minutes behind my personal record felt like an unmitigated disaster. Pulling myself together, I returned to the track and trained harder and eventually succumbed to more injuries that kept me out of racing for most of 2016 and 2017.

But in 2018 I’ve finally made it onto the comeback trail, with several races under the belt this fall ranging from 5k to 1/2 marathon, and each of them a little bit of an adventure now that I’ve transitioned to barefoot running (for example, it was quite a surprise to show up at one race expecting paved streets and finding instead a rail trail strewn with gravel, or in another race to find the pedestrian walkway across a bridge was covered in metal planks!) While these races have added to my confidence, I’m not targeting a personal record at this Turkey Trot, so much as thinking how this race could help prepare me for running goals next year.

Now it’s race day. Left calf a little sore following an aggressive hike in the Catskills (I just had to get up there fast despite deep snow). Sore calves are not to be dismissed: indicative of poor barefoot form, calf strains are associated with the two-year injury cycle of 2016-7. This morning the plan calls for a reassessment of target pace after completing an easy warm-up jog and then again after a few strides at speed. But all feels good. The current plan is a “go.”

Temperature in the 30s, overcast, and blustery along the Chicago Lakefront.

Lining up next to Philip at the start, listening to the National Anthem. Time to remove shoes and stick them in the back of my tights and tie sweater around waist.

The start sounds and a few steps walking forward as the crowd surges across the starting line, and then the first few tentative running steps on cold pavement.

A fellow running next to me mentions that he ran barefoot once in a winter race and his feet got so cold he couldn’t feel his toes for three months. “Gotta know your limits” I grunt back, dismissive.

A few steps along Lake Shore Drive — odd to be running on a highway — and then it’s onto a paved path along the shore of Lake Michigan. Smooth surface, some random pebbles and chunks of salt. Feet cold but not numb.

Gradually accelerating to target pace, as I weave through the crowd — a moment of panic, wondering can I sustain the pace? Stop thinking about the distance.

Passing mile 3, and breathing’s settled down. . . some time later, passing mile 4, running harder now, coming up silently on people from behind, weaving through the crowd, getting ready to sprint.

Onto a dirt trail for the last quarter-mile. Fallen leaves with thick stems dot the trail, noticeable underfoot, the finish line visible ahead.

Gasping for air, the final stretch, and it’s all over. 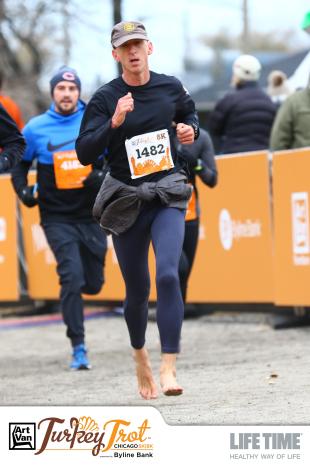 ​
I walk back along the course to cheer on my wife, find Philip already back at the car, and we’re off to see friends and then it’s back home for Thanksgiving dinner.

And now it’s time to sign up for the next race: another chance to do something small and meaningful.