I ran the 5k in this. I only over-exerted myself at about the beginning of mile 3. I felt like someone had punched me in the stomach. The bottom of my diaphragm was spasming, which I have never had happen before (if anything spasms it’s the top of my diaphragm). Other than those 3 painful minutes (where I almost had to walk), I regained control of myself, and my exertion level the rest of the race was perfect. Deep breaths at one full second in, and one full second out. My form felt great. I had been doing weeks of pretty much daily pelvic blocking (to keep my hips straight), religiously doing my exercises my MT had given me, and also working out the trigger points around my ankles (thanks Dr. Stoxen!). All of these things made a HUGE difference! This race was easier on my body, than the last race, by far. I passed more people than who passed me. My pace ended up being 9:52 and I placed 14th in my age group and 123rd in my gender –though I’m not sure out of how many. I got to give a “barefoot running speech” during the race when I chatted with a dude for about 5 minutes who gave me the “that’s hardcore” comment. After the race I talked to a couple of bystanders for about 5 minutes as well –and Mike (migangelo) joined in the lecture. These people asked if I ever stepped on something that hurt. I said “yes” and their eyes bugged out of their head. I figured that maybe they would notice that I was STILL alive, despite stepping on sharp objects occasionally.

Afterward we did our post-race ritual, beer drinking. Neither my husband nor Mike would dance with me to the Spanish music. Rude! They musta been afraid I would embarrass them, or something. JAmusingly, a little 2 year old boy kept trying to pick up my other beer I had set down on the ground. Lol. Mike ran into some chicks who recognized him/his feet/his weirdess from the last race (Bridges to Brews). I think that he thinks he is famous now. I think he should hand out autographed photos of his bare feet after the next race. 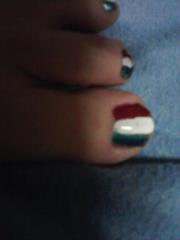