Preface
Before we get into the full race report I need to preface this report with the fact that I have never run a trail barefoot, ever. For the past 1.5 yrs I have been training on roads, pavements and the occasional grassy oval. I had never done a race barefoot either so I am not sure what I was thinking…..oh now I remember this was Kali’s idea!

Recon Day – Friday
Arrived at Port Stephens on Friday morning and checked into the Fingal Bay caravan park and pitched the tent. I was keen to do a quick recon of the course but the family was hungry so we drove into Nelson Bay and grabbed some lunch and food supplies for the weekend. Logistics taken care of I headed off drove along the urban part of the course and up into the National Park where the sealed road ends and trail running fun begins.

I dropped the thongs (flip flops for non Aussies, jangles for Kiwis and I have no idea what they are called in other countries.) and headed up the trail. The first part didn’t look too bad. 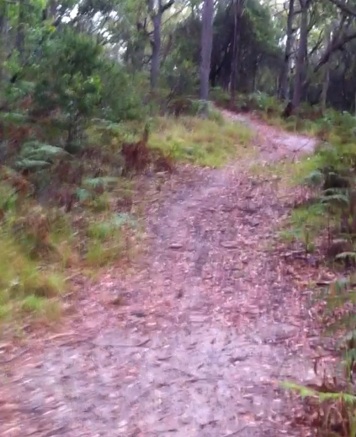 Then it got fairly rocky with slippery clay sections and at that point I had pretty much made up my mind to wear the VFFs. The trail crosses another road in the national park a few kms further in so I drove around to that point and did another recon up the trail. Here I found some nice sandy trail sections which gave some more encouragement to the barefoot option.

At this stage I was still in two minds about the VFFs. Shortly after the recon though Andreas (aka Spiderweb) showed up and we went up for a quick recon of the first section again and he thought looked ok for barefoot. Not long after we met up with Kali (aka KaliPjamas) at rego and inspired by them I decided, barefoot it is!

Race Day – Saturday
We all met up a few minutes before the briefing with our timing chips securely fastened to our ankles. Kali is holding the new barefoot beach shoes but they are strictly still prototype so no orders just yet please. 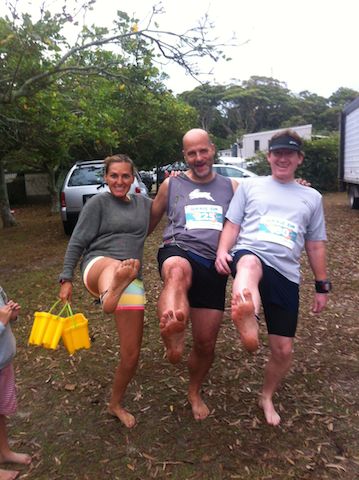 We were a little slow to the race briefing, which meant we actually found ourselves at the front of the race group. My strategy was to go out as fast as I could in the urban sections so it actually worked in my favour. After a short 600m of grass and some gravel we turned and ran along the beach for 500m. Perfect, while everyone was running away from the water I just ran in it as it lapped at my ankles. A few jokes with the other runners about not getting my shoes wet and it was off the beach and onto the foreshore footpath for about 1.5km and then up into the first trail.


The first section was not too bad and I was able to maintain an ok pace. But then it started to get really rocky and difficult for a novice like me. 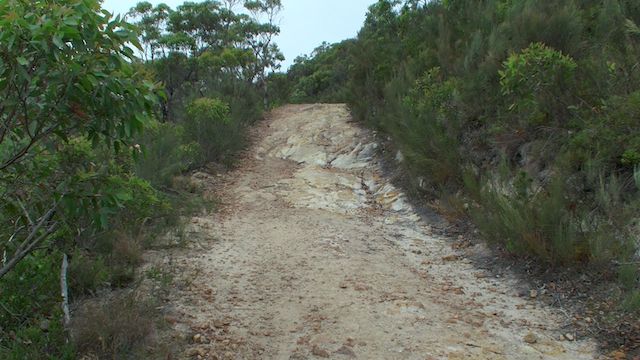 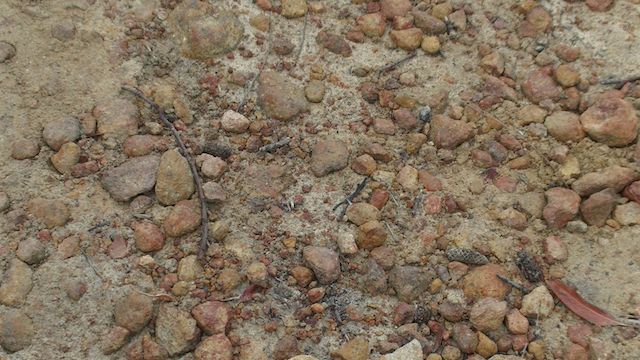 About this time Spiderweb came past and was having no issues with the rocky ground. Definitely something I need to work on. Just as I was hoping for some respite from the lose rocks the trail turned into 200m of the nastiest jagged blue metal stone that I have ever seen. I call it the Devil's Playground. 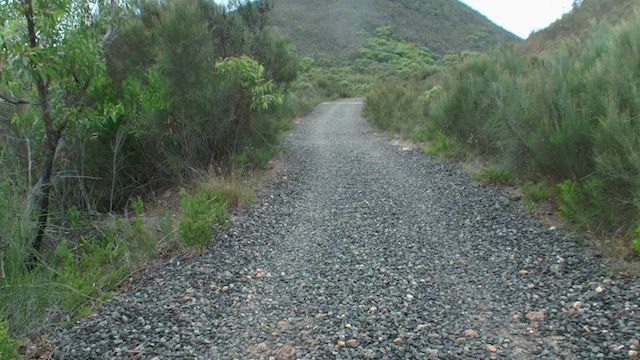 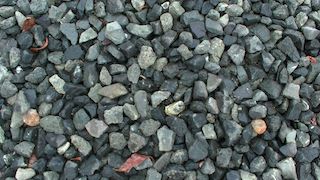 I could barely walk over it let alone run. The picture does no do it justice! And then Kali flashed by like it was soft bed of daisies yelling “bend your knees!” I tried.

The worst part was the Nostradamus prophecy I felt knowing I had to come back that way. About half way across it I felt a massive pain in my arch and called out “I’m hit! ...... I’m hit!” 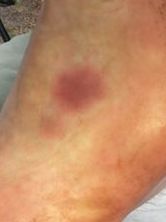 I took a couple of harden the f..k up pills and headed off road for a few meters to avoid a small section of the devils playground. I was pretty sore for the rest of the race but I just tried to concentrate on my form and avoiding mining extracted, devil shaped, sadistically placed hard points of nature.

Just before the half way mark I was feeling ok though and hit a sandy down hill section that was one of the best running experiences I have ever had. One of the elites from the triathlon race had just past me so I picked up the pace a little and as I passed Kali I said… “I reckon I can take him”. I sprinted as fast as I could and overtook him and stayed in front for all of about 15 seconds until he rudely ran past and gave me a little hip and shoulder treatment. I didn’t care. I just couldn’t stop smiling about how much it must have pissed him off to have fat old barefoot runner sprint past him! 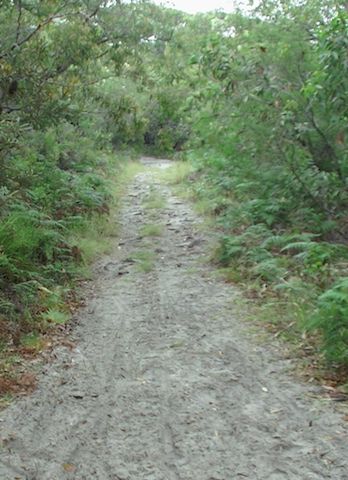 After the turn around I took a gel, grabbed a quick drink break and headed back up the trail towards the devils playground. As I hit the rocks again Kali scooted past me again and floated over the blue metal singing “Bend your knees….bend your knees….” I tried...again...

I tried to pick up the pace in the last few kms back in the urban area and along the beach but strangely found myself chatting and joking with other runners. I finished in 1:18 which I was happy with, slow, but it was a lot of fun. 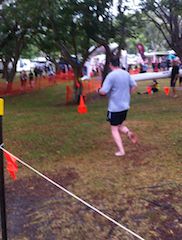 Spiderweb and Kali were voted king and queen of the trails and I got the encouragement award and massive bruise on my left arch to prove I finished. And this photo…… 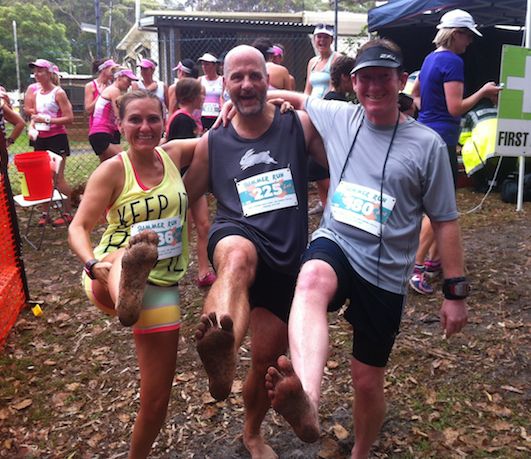 
Epilogue
The encouragement of the other runners was really great and I think we had some real fans and raised the awareness of what is possible. I got everything from “your awesome”, “try the edges”, “I can’t believe you are barefoot” and of course the usual “lost your shoes” etc etc

Huge thanks to Andreas and Kali for their inspiration to ditch the VFFs. I never would have done this without them. I think we all feel we achieved something awesome and had a heap of fun along the way. Trail running is tough and but that is where I am going to spend my time training now. Thanks for reading to the end and for the support and advice from everyone on the forums.