Barefoot Dutchman's World Record Walk Arrives In Nambucca Valley
By News Of The Area​
T’s been a simple matter of putting one foot in front of the other.

It’s just that Dutchman Anton Nootenboom has been putting one bare foot in front of the next all the way from Cairns.

He left Cairns on foot in May, and in the next few days he will reach the Nambucca Valley, on his way to Sydney in a world record barefoot trek.

Anton has already beaten the world record for a barefoot walk when he passed through the Gold Coast but the full trip from Cairns to Sydney will set a record that will be very hard to beat for anyone brave enough to follow in his footsteps.

With feet worn down by concrete like sandpaper and bruised by stones, this epic journey is no race, rather a slow and steady effort that sees Anton walking with no set stops other than the final destination, his adopted hometown of Sydney, 2,600 km’s from...
Tweet
Continue reading...
Sep 23, 2021

by Barefoot TJ at 1:26 AM (3,650 Views / 0 Likes) 0 Comments
Beavercreek cancer survivor runs 100+ miles to raise money – Here's how he did it | WDTN.com
By WDTN.com
​
EAVERCREEK, Ohio (WDTN) – In 2004, Beavercreek father, Randy Kreill, was diagnosed with an aggressive form of thyroid cancer. He was 42-years old at the time and was determined to take his health into his own hands.

Kreill discovered and read “Born to Run” a book detailing how the Tarahumara Indians used a plant-based diet and barefoot running-based lifestyle to stay healthy and whole.

Over the last decade, Kreill has changed his lifestyle and started...
Tweet
Continue reading...
Sep 23, 2021 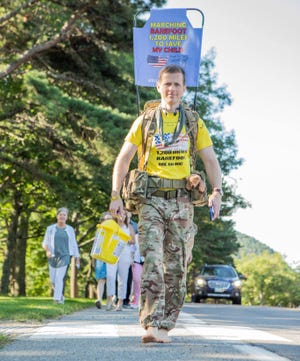 Even if that means taking some 2.5 million steps barefoot, in what he calls “a race against time” to develop therapies for the disease. He plans to walk the equivalent of a marathon every day, passing through York County, Maine, and Seacoast New Hampshire along the way.

Brannigan recently started his 1,200-mile charity walk barefoot from Maine to North Carolina carrying 55 pounds of his army gear, including his tent and food, to raise awareness and money to support clinical trials for a gene therapy treatment for Cornelia de Lange Syndrome, or CdLS....
Tweet
Continue reading...
Sep 4, 2021

I’m amazed to have yet another 5K race here in little ole Rangely, Colorado, two weeks after the last one, and this is indeed as advertised: free. All one has to do is show up here in the Elks Park parking lot before 8, sign a form, and you’re given a ____ with a number. I’m second, so I get 102. How or why this is happening at not cost I’m not quite sure, but I think that the richest guy in town is sponsoring this whole three days of festivities over Labor Day weekend, which is I think ironic, but nobody really celebrates the labor part of Labor day anymore anyways. In any case, there are volunteers—a cadre of young women.